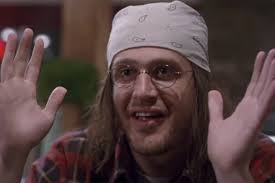 Spotlight.  Spotlight was a good movie.  It had my attention all the way through.  It was about the “Spotlight team” at the Boston Globe.   They investigated the Catholic Church.  I know it sounds crazy but … there were Priests molesting kids.  And there were A LOT of priests doing it.   Gotta recommend the movie.   SPOTLIGHT!

The End of the Tour.  This is a movie about David Foster Wallace.  He was a genius.   And he committed suicide.   The movie is the interview between David Lipsky and David Foster Wallace.   Obviously, artists become more famous after they die.  Based on DFW’s work, he had genius qualities.  Also, he was not a perfect person by any regards but as a character study the story is very interesting!   I gotta recommend The End of the Tour.

Me and Earl and The Dying Girl.  This film was excellent.  The style was great.  Also, be ready for some FEELS.  It will hit you.  It serves as a good platform for an interracial friendship and the tender relationship between an awkward teen and a Dying Girl.  I really enjoyed the film.  It is definitely not your typical high school movie.  Two Thumbs up (and as a tribute to Tim Heidecker “I gotta give it 5 Bags of Popcorn.”)

The Talented Mr. Ripley.   Fascinating but a little bit sickening.  The film was definitely interesting.   I find it interesting due to the idea of the relationships and also, the movie is possible because the players within the film are all part of the wealthy elite.

Adult World.  The movie has charm.  I enjoyed the soundtrack.  I liked the way this film FELT.  I have a little crush on Emma Roberts.  Definitely a great film for recent college grads, I think the film brings value in that way.