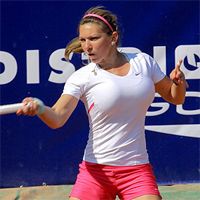 Here is an update on this year’s French Open.  I had previously said that these women would make the Quarterfinals.

Only 3 of them are still left in the tournament.  Kerber lost, Cibulkova was upset by Ons Jabeur of Tunisia, Davis was knocked out, Gavrilova lost, and Siegemund was out with injury.

These 3 are the players to watch.  Also, Ostapenko is very dangerous; CiCi Bellis I think will lose to Caroline Wozniacki.  Muguruza is a former champion.    Svitolina is talented.  And Pliskova is #2 in the world.

So now look for these 8 in the quarterfinals.

(and here is one more contender: Timea Bacinsky)

The current women’s pro tour is extremely difficult to predict.  It appears to be very common that in grand slams the upsets just rain like hellfire.  Unknown players get HOT and rip winners; the seeds get cocky and can’t make their shots, and some players just mentally breakdown.  Just look at Ons Jabeur of Tunisia!  Nobody was expecting her to come through qualifying and then knock out Cibulkova.

Also, on the Men’s side: Tsonga was upset in the first round.   Nick Kyrgios was defeated by Kevin Anderson of South Africa.   Monfils will play Richard GasQUET (I am expecting Monfils to win that one, BUT Richard is extremely talented on the clay)

It looks like there is a high chance of NADAL and MURRAY and DJOKOVIC and WAWRINKA going deep in the tournament.