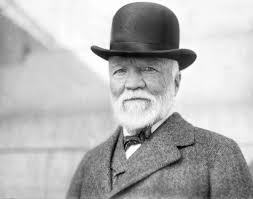 Andrew Carnegie was one of the original business badasses.

He was a proud Scottish Man.   He had a beard.  He was a philanthropist.

Carnegie is a Rags-To-Riches story.  He started working at a young age and worked his way  up.         He was a master of telegrams and then he moved onto the railroads.

He was the first person during that time period to actually use …. SCIENCE when making steel.    During his time you had to rely on basically a “Witch Doctor” to know how to make steel within the steel (ball) machine.    He hired a CHEMIST to analyze the process and components of making steel.  It was revolutionary.

Carnegie is also known for his article “The Gospel of Wealth.”   It states that the wealthy have a duty to use their wealth to help the people of the world.   Crazy right?    That rich people should use their money for GOOD?      It was great.    The wealthy should thank the world for allowing them to earn their fortune.

Basically, Carnegie was the man.  I HIGHLY recommend his autobiography.  ANDREW CARNEGIE!