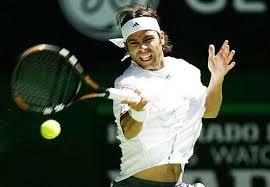 Fernando was known for having one of the hardest forehands on tour.

He played his best in the 2007 Australian Open where he reached  the final and was being coached by Larry Stefanki.    Fernando was playing smart, he would use a big slice serve to pull his opponent out wide and he would follow it up by hitting a BIG FOREHAND to the open court.   Another strategy he would use is to just SLICE SLICE SLICE his backhand and wait for his opportunity to hit a BIG FOREHAND.  He could also surprise his opponent by hitting his one-handed backhand HARD AND FLAT.

Federer said he did not think anybody hit the forehand as hard as Fernando.

When Gonzo “pulled the trigger” on his forehand it was a bullet.    Just as big (if not bigger) as the Del Potro forehand.

He also, played a really good match against Andy Roddick at the Australian Open in 2010.  It is called the “Roddick Gonzalez Super Shots”