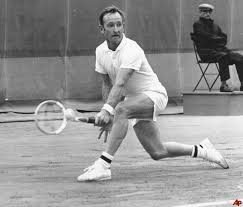 They were friends and they enjoyed playing each other.

The President said they would play doubles and he could pick his partner.

On the day of the match when everyone showed up.   President Bush chose the local club pro for his doubles partner.   And Jerry Weintraub brought Rod Laver!      President Bush was excited and wanted Laver to play with him but Jerry stopped him and said “Mr President we had a deal and I picked my partner.”

So of course, they played.   Weintraub and Laver won the match.

(When I Stop Talking you’ll Know I Am Dead, Jerry Weintraub)