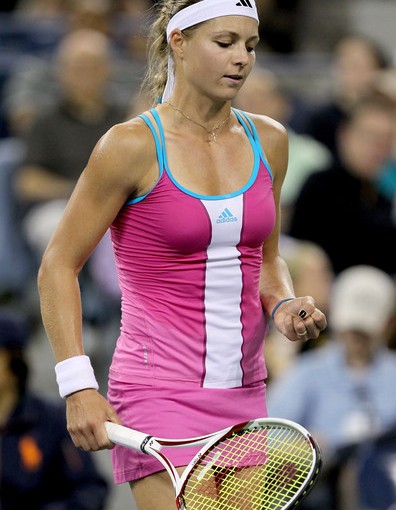 I was battling my arch-rival Little Johnny.  Sometimes just called Lil’ Johnny.   Lil’ Johnny was not very tall.    He was a grown man but not much taller than a 12 year old boy.   Johnny the Little hit the ball very flat.   And because of his size it was a tricky play.  Since he was not very tall when he launched his flat ball it often did not look like it was going to go over the net however, Lil’ Johnny has been playing his style forever and he was incredibly good at making his low flat ball.

He had a break and I was serving at 1-3 in the first set.   I tossed up my ball and all I could think was “kick, kick, kick” (I really wanted to kick that serve).    Lame.   I hit it in the net. This can be a very frustrating game.

I was preparing to toss up the ball for my second serve.   Then a lovely lady walked by.   She had silky blonde hair and a muscular body.    I double faulted.

“Why do all of these beautiful women show up at my matches?”

She was thin and she was strong.  This girl was beautiful.

I couldn’t believe it.  She was pulling for Little Johnny.    Damn.  Maybe he isn’t that little?

I walk back to grab a ball off the fence.   Did I leave the stove on?  Focus.  Focus on playing tennis.

I use topspin and kick my serve in.  Little Johnny steps up and hits it cross-court.  I go for the backhand down-the-line and I miss it wide.  Damn.

Damn.  This is demoralizing.  I’m distracted now and Lil’ Johnny has this super hot chick pulling for him.  This is unbelievable.

My mind wandered to that one girl who liked me in Middle School.  But I kind of ignored her … ….   I wonder if she was super beautiful now?   If I had just stuck with her maybe she would be cheering for me right now.  Damn.  Life.

Lil’ Johnny continued to hit deceptive and tough flat balls.  I continued to be very distracted with my clusterFudge of a mind.